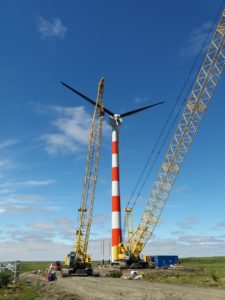 EWT is proud to announce that it has successfully installed and commissioned 2 DW54*900HH50 turbines in the towns of Bethel and St. Mary’s in Alaska. The turbines are owned and operated by AVEC which has a fleet of 34 wind turbines in 11 communities. The two EWT turbines have increased their total installed wind capacity by more than 50 percent and will add seven communities to those receiving electricity from wind. With their distinctive red and white livery, the turbines will be visible from a significant distance, even in storm conditions. The turbines were installed over the summer of 2018, with the timeline to Mountain Village being built during the winter 2018/2019 the turbines are now ready to operate at full capacity. These projects have been made possible by the active support from local communities and local businesses were actively engaged in many aspects of the construction of the projects. AVEC expects the two turbines to displace about 350,000 gallons of diesel fuel annually resulting in considerable cost savings and a significant reduction of CO2 emissions.

The DW54*900’s used in these projects were equipped with EWT’s cold climate package which allows the turbine to remain operational up to -40°C. The turbines blades are black to better absorb sunlight, causing the blades to emit heat and reduce the buildup of ice.